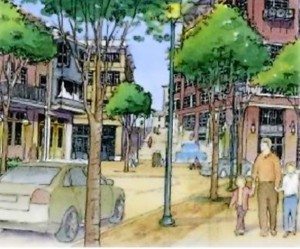 A well-planned jumble of multi-story commercial and retail buildings would rise in several densely developed city centers. Except for the modern gloss, they might look as though they had been there 100 years.

Rows of town homes with no front yards would crowd nearby tree-lined streets. Neighborhood parks would provide communal recreation, and residents could walk to shops and restaurants.

And a different mix of people might inhabit the town, which now tends toward families with young children. Professional 20-somethings and well-heeled retirees might fill in on either end of the spectrum.

That’s part of the vision of city officials, who are considering stringent new building codes for certain areas of Oviedo in order to make their plan happen.