DELRAY BEACH, Fla.—The Delray Beach Community Redevelopment Agency has selected a proposal for a new office and entertainment complex, including an iPic Theater, for a highly sought after redevelopment site in the downtown core. The CRA Board awarded the Request for Proposals (RFP) for the Downtown Core Business 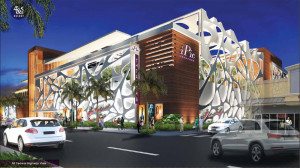 District Fourth & Fifth Avenues Site to the theater project over three other proposals at its August 22, 2013 meeting.

The winning proposal, submitted by Delray Beach Holdings, LLC, calls for the creation of a 529-seat iPic Theater with 8 screens, 42,869 square-feet of Class A office space, 7,290 square-feet of retail space, and a 279-space parking garage. The project will create nearly 300 jobs, many of which will be professional positions. As many as 65 jobs will be created by iPic Entertainment, which plans to relocate its corporate headquarters from Boca Raton to occupy a portion of the new Delray Beach office space.

The Fourth & Fifth Avenues Site includes the Old Library Building on SE 4th Avenue, the Chamber of Commerce office building on SE 5th Avenue, and the adjacent public parking lot. Delray Beach Holdings, LLC offered a purchase price of $3.6 million for the 1.57-acre site, located about a half-block south of Atlantic Avenue in the downtown core.

The CRA is beginning contract negotiations with the developer to set the terms and conditions of the Purchase and Sale Agreement. After finalizing the Agreement and obtaining city approvals, the developer estimates a 20-month construction period, with anticipated completion by 2016.

A copy of the Delray Beach Holdings, LLC proposal is available for download at http://bit.ly/YSjrZ7. For more information about the Delray Beach CRA, call the CRA office at (561) 276-8640. To learn more about other CRA projects and initiatives, visit the CRA website at www.delraycra.org.